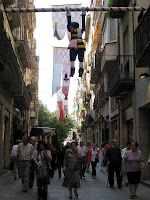 Girona, like many ancient towns, has many old legends which are still celebrated even though most people have long ago forgotten why. Local schools and their teachers have a duty to pass on as many of these tales as they can to their students so that these traditions continue to have some relevance to the citizenry. The first I will cover is the Tarlà or harlequin of the Ramblas The Tarlà comes out during the Girona spring festivals and can be seen for about a month usually from mid April before Sant Jordi to mid May after the Temps de Flors or Flower Festival. You can see him hanging from a pole stretched over the Ramblas where they narrow and the street is actually called l'Argenteria. Along with many colourful banners which are also strung along this street it makes for a very impressive and photogenic sight. So why is there a dummy dressed as a harlequin hanging and somersaulting from a pole surrounded by banners? Well as they say fact is often stranger than fiction and I defy anyone to invent a stranger explanation than the real one. During the middle ages there were many plagues like the Black Death that swept through the crowded and unsanitary towns of the time and several people in this street had died ; as a consequence the city authorities had determined that the area should be sealed off to stop the plague spreading to other areas. 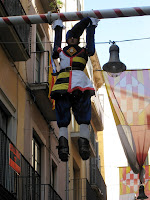 During the weeks or months that they were cut off from all their fellow citizens some of the residents decided to cheer up their neighbours with displays of acrobatics from poles erected between the narrow buildings. No one knows if this was to give thanks for surviving or just another of those ideas that arise when you don't know if you will be alive in a few days so make the most of life while you have it. Anyway, the amazing part is that 500 years later we are still admiring the spectacle , even if most people are not sure what the meaning behind it is! 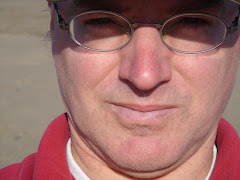